Great Composers Who Followed the Advances of the Piano 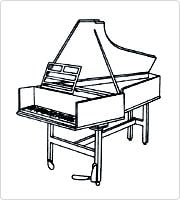 Gottfried Silbermann, a specialist in constructing organs, took over the work that Cristofori began. He studied Cristofori's designs and improved upon them.

Not long after in 1747, Johann Sebastian Bach performed one of his historical pieces in front of Frederick the Great on the piano that Silbermann dedicated to the king.

The Piano that Mozart Fell in Love With 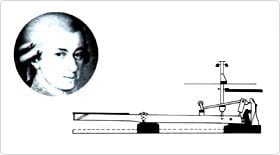 A man that contributed greatly to German piano manufacturing was Johann Andreas Stein (1728-1792).

Stein improved upon the Silbermann piano mechanism and developed what would later be called the Viennese action, a new system that was used for many years and gained much popularity. This new piano featured a bright tone quality and a keyboard that responded well to the player's touch. Mozart fell in love with these aspects of the new instrument, on which he wrote many renowned piano pieces.

The Piano that Beethoven Used when Composing 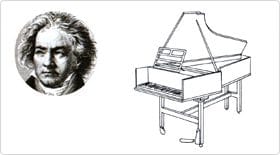 Meanwhile, Johannes Cristoph Zumpe in England introduced a hammer action to the clavichord and produced a square piano. One of the first known uses of a piano as a solo instrument in public concert was a performance in 1768 by Johann Christian Bach (son of J.S. Bach), and this square piano was the one used on that occasion.

Later, John Broadwood in England added improvements to the English action that Zumpe invented, increasing the elasticity of the strings, and also strengthening the frame. His English action (in around 1780) produced a touch with a lower sense of resistance and a more powerful sound. In that regard, this instrument can be termed the precursor to the modern piano.

In his later years, Beethoven wrote many masterpieces on this piano made by Broadwood.